Around 4 to 6 years ago I got married to a woman despite the fact that she was from the United States. Don’t get me wrong, the people are nice and all, but I’m from South America, and you took the name “America” from us, along with our fruit, our oil and 4 to 6 democratically elected presidents that didn’t quite liked that. So don’t take it personally if “place of origin” was on the cons list.

But Autumn told stories about a place with vulnerability, and empathy, and multicultural understanding, and she told me about the day when one of the most significant presidents of American history said “I am a jelly donut” in German. And I realized “America” was possible. Because it meant Kennedy was a flawed, clumsy human like the rest of us, and in that moment millions of people in Berlin (in Berlin!) saw a world leader saying “I’m soft, I’m warm, I’m filled with jelly,” and people were like “Lol, you’re not a donut but are you baked?” To be able to empathize with Kennedy, wow. That’s hope. That’s the American Dream right there.

Well, not quite. I first heard it from Charlie Kojis and Adam McShane’s podcast “Adam asks Chuck,” and I got official confirmation from the Internet. It turns out people did not hear it that way. So the saner, empathetic version of America that my mind held is gone. Great. Wish I knew that before I completed my citizenship application. All I have left is right turns on red lights and unlimited refills of Coke products at Chipotle. And my wife, of course, who has taught me so much (including the differences between who and whom), and whom I love so much. She really is a beautiful jelly donut, despite of course of her “cons”. Which I guess are now mine. Sigh.

And that is all. Good night and gesundheit. 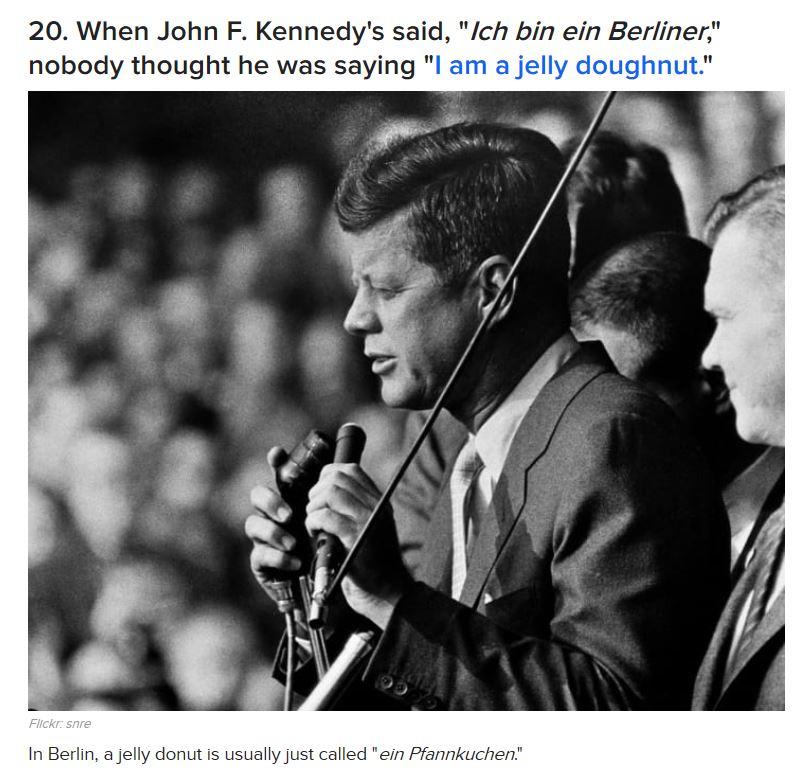